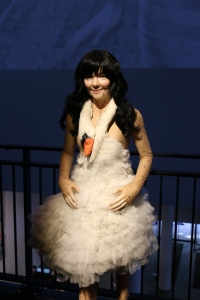 To many people, including myself, Björk is a mystical, cosmic non-human entity from the future who allures us into her realm with colors and sounds and images and warmth and light and darkness that she’s pulled out of her little mystical pocket like a forgotten receipt. “Oh that? I was wondering where that went!” I imagine that’s what Björk says every time she makes a new pop album. I don’t think anyone would be that reductive to simply call her a pop singer however; I think we all recognize she is so much more than that – an artist’s artist, with an alien voice, who is prolific and innovative; one who uses her entire body and mind as her instrument. She is a full-bodied, full-souled, full-hearted, living, breathing pulsating talent.

Though her talents and accolades are many, what she’s done for pop culture as a whole cannot be measured in sales or albums. She’s a genius and her creative output is dizzying. What’s important to mention, although obvious, is that she’s a woman thriving in the art world, because female artists (of all stripes) do not get much recognition in the art world unless they are constantly taking their clothes off or chasing gimmicks. Björk is brave in both her sincerity and in her execution, which sets her apart from other artists. She’s emotional, vulnerable and honest. Most recently, she allowed her pain to dictate her art and it produced the nothing-less-than-magical Vulnicura, her new album which is the result of her breakup from artist Matthew Barney. Her voice makes her an alien; her emotions make her human.

Her voice is instantly recognizable and her fingerprint is clearly on everything she makes. And let’s talk about how weird she is. Yes, she’s weird. Swan dress? Check. An army of dolls that look just like her? Check. Costume designer on speed dial? Check. Besties with Michel Gondry? Check. But she’s completely comfortable with her weirdness, which makes weirdos like me think that weird can be wonderful if you embrace it and don’t hide it, or worse – hide behind it. There are times (too often to mention) during my mental meanderings when I imagine I’m flying to work, above the cars and pedestrians, wearing an Iris van Herpen gold, black and pearlized bodysuit with an elaborate black and white lace headdress and I think: Björk would totally wear this, and what’s more, Björk would think this thought.

However, if everyone had a crazy, vivid imagination, there might not be a need for MoMA to honor Björk’s imaginative efforts and achievements with a retrospective, starting tomorrow March 8th, and running until June 7th. And she deserves a solo show and she deserves the honor. We all want her to be celebrated for her craft, and the concept of a Björk retrospective sounds like a really great one. So, after years of prodding her, the MoMA finally convinced Björk to allow them to do this, but the results are unfortunately not very good.

I am not the biggest fan of the MoMA. They worry more about selling tickets than displaying true art. Considered the world’s Modernist Mecca, they’re unusually drawn to gimmicks and sometimes their shows feel downright tacky or cheesy. And what about the actual space? The aesthetics and architecture of the building itself don’t really make much sense. There are small passageways and galleries; large stairwells and small ones, escalators and elevators; rooms devoted to descending staircases; awkward viewing spaces and large holes that could be filled with, I dunno, wall space or a complete floor so we can view art comfortably? This is an art museum, right? I think we can all agree that it’s a design nightmare for a museum. It’s designed for you to consistently bump into other people for two hours straight. You cannot look at art comfortably in that space unless you go there at 8:30am on a Tuesday.There’s no joy in that.

And in continuing with the uncomfortable “No Joy” policy that they’ve instilled since 2004, the MoMA has brought us Björk, a retrospective, which is supposed to present three decades of “sound, film, visuals, instruments, objects and costumes,” from everyone’s favorite creature, Björk.

It does none of that. The entire show, spread across three awkward spaces on three different floors, is a mess, a disjointed mess. A disappointment to both Björk fans and a disappointment for art lovers alike. It has zero narrative, no cohesion and nothing makes sense, not even the space it occupies. Why not house the exhibition on one floor? Or at P.S.1? And when the show opens to the public, where are they going to put everyone? No one can fit in this space as it is.The show is a collection of three parts: The first part of the show located on the first floor in the lobby and really is just three instruments of the organ variety. The second part, which

is on the second floor, Black Lake, is described this way, “a new sound and video installation, commissioned by The Museum of Modern Art.” It’s a music video, guys. A long music video. And you have to sit on the floor to watch it. That’s all.

The second part is on the same floor, and while you are herded into it, you miss all of the album art on the walls, which is really sad since they’re all very beautiful and creative. The second part is a screening room, and it’s devoted to all of her videos, but it’s too small for the amount of people they allow in, which leads to a very unpleasant experience. Also, who is going to sit in one dark room at the MoMA for more than two hours watching music videos? Why not break this up over the course of the exhibition in different rooms? It’s nonsensical!

The last part, titled “Songlines” is located on the third floor and you need timed tickets because it will take you 40 years, I mean 40 minutes to get through it. It’s boring. They hand you headphones, and you put them on and suddenly there’s a voice telling you a stupid story that really doesn’t make any sense to us mere mortals, and while you are listening to this stupid story, you wind through a very uninspired, dark space with some costumes to look at along the way. The feeling is lukewarm and akin to going to the Hard Rock Cafe. Or a haunted house. Ever been to a lame haunted house and you’re not very scared and you’re waiting for something to happen, and you turn a corner and nope, it’s just another room, and nothing ever happens? Yup, that’s this show. A haunted house – without the very necessary element: the haunting.

Everything feels like it was put together last-minute and as an afterthought. None of the concepts are fully developed and the show itself is too short and choppy. That’s what I disliked about this show the most; its utter lack of forethought, introspection or depth. There’s no depth at all and it feels lazy; just some dresses, a couple of robots, and a song . Björk is so much more than a series of costumes, but this show reduces her to just that. You can skip it, and you should. Our beloved Björk deserves better.

All photos taken by Sarojini Seupersad.

One thought on “MoMA’s Most Ambitious Project Yet: Ruin Björk For Everyone”