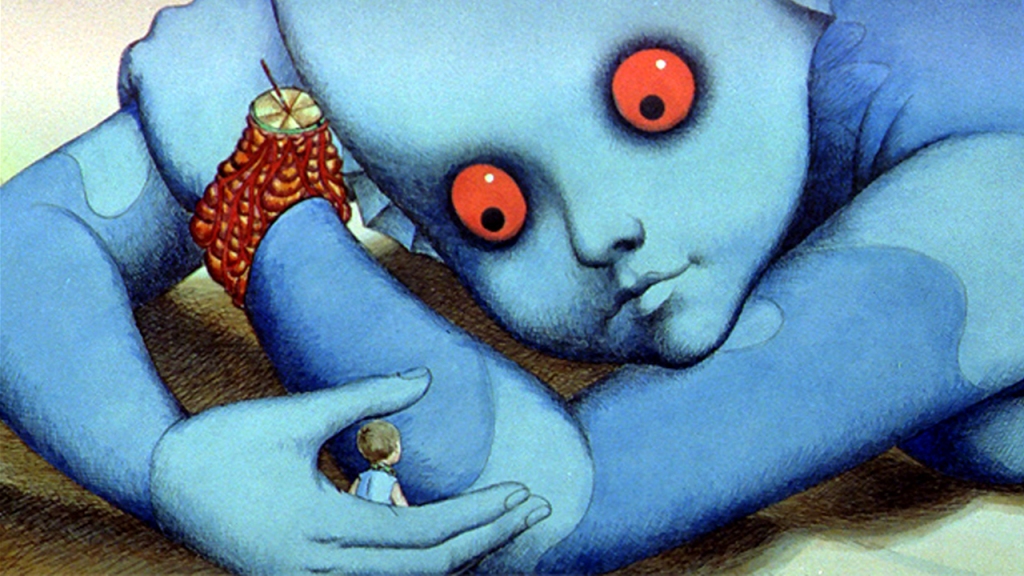 In December of 1973, the New York Times film critic Howard Thompson, known for his pithy critiques, reviewed a rather strange-looking French animated film called “Fantastic Planet.” In his review, he says this of Fantastic Planet: “The story itself is a sci-fi honey, with tiny earthlings ‘from a destroyed planet’ dominated as pets or outcasts by huge, robot-like rulers. This is somber, dead-earnest stuff.”

To be sure, Fantastic Planet is a weird film. It’s a 1970’s political, psychedelic sci-fi fantasy cartoon made through the lens of a Surrealist painter. The plot – an alien planet with giant blue creatures as its ruling class – is bleak, yes, but also contained in this “sci-fi honey,” is a unique level of artistry and imagination which hasn’t been replicated since. And while the plot makes sense, the planet itself does not – or does it?

On the planet Ygam, rules a giant native species, the oppressive Draags. A nuisance species from another planet, tiny enslaved beings called Oms (perhaps very purposely similar to the word ‘man’ in French – homme), are treated like pet mice and are kept collared and controlled. Oms also live in wild, feral communities, and Draags often fumigate Om populations when they become too bothersome. The story, or the allegory, revolves around a pet Om named Terr, who is found as a baby and taken in by a young female Draag, named Tiwa. Tiwa loves her pet Terr, but does not know how terrorized he is and mostly treats him like a toy. In one scene, Tiwa instructs Terr to say the phrase, “Terr loves Tiwa, repeat,” in response to which Terr repeats the entire phrase, including the word, “repeat,” and then they both fall asleep, having exchanged a forced and insincere loving moment. As Terr grows older with Tiwa, Terr inadvertently becomes educated by listening to Draag school lessons on Tiwa’s learning headset device, right alongside Tiwa. After this, he’s actively interested in learning on his own and listens to the headset whenever he knows no one is looking. Consequently, his education is what changes the plight of both Draags and Oms forever.

The film, loosely based on the science fiction novel “Oms en série” by Pierre Pairault (popularly known by his pen name Stefan Wul) is directed by René Laloux, the French director and animator, and uses a low-budget cutout animation technique, similar to that of Terry Gilliam’s animations in Monty Python’s Flying Circus. This technique, which places cutout illustrations on a static background, is used expertly in this film by its art designer Roland Topor, a French writer, illustrator and painter. Roland Topor collaborated with Laloux on several occasions but Fantastic Planet was their only feature production done together.

So what happens to the “robot-like rulers?” While Thompson’s review is accurate, it doesn’t go deep enough, it doesn’t satisfy, maybe because he simply couldn’t predict that no other animated film would ever come close to this surrealist nightmare, in either vision or feeling. And if the vision of this strange film is singularly unique, and if it holds up well over time (it does), it’s because of the collaboration between two influential French artists: René Laloux and Roland Topor.

The cutout animation used in Fantastic Planet gives an eerie depth, color, intelligence and other-worldness which other flashier forms of animation might not have been able to convey. While the story matters a lot in this film, the scenery and the animation are its main characters. The other characters – the Draags, shape-shifting beings, meditating, scary and blue; the planet Ygam, a treacherous surrealist world, dangerously alien and confusing; the Oms, vulnerable, wild, exploited and misunderstood – stand on their own but the artistry and the gloomy tone are really what matter.

In June, the Criterion Collection, the film preservation juggernaut known for distributing classic and contemporary films, released a digitally restored version of “Fantastic Planet” (or Wild Planet, which would be a closer translation of “La Planète Sauvage,” its original French title) to DVD and blue-ray. And with its new release, one can’t help but notice parallels to our present-day political strangeness. Now is a perfect opportunity to experience (or revisit) this beautiful and meaningful sci-fi classic.

This film is in French with English subtitles.

One thought on ““Fantastic Planet,” A Strange and Mostly Unknown Film”